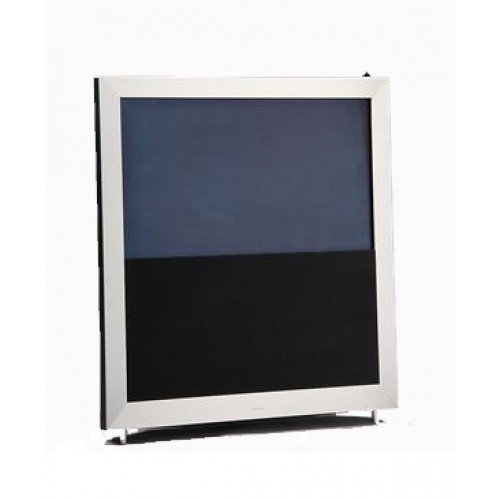 BeoVision 5 was Bang & Olufsen's first home cinema plasma screen. With its big screen, advanced sound system, original positioning options and sophisticated remote control, the BeoVision 5 sets the standard for plasma solutions, especially when it comes to integration in the home. Until the discovery of plasma technology, the idea of having a TV screen hanging on the wall was restricted to the realm of science fiction films. Now the dream has become a reality, and Bang & Olufsen has brought it one step closer by offering a plasma solution that is more than just a "picture on the wall".

BeoVision 5 is the natural choice for people wanting to combine large-scale audio-visual experiences with a high degree of flexibility in the positioning of the TV screen. All of Bang & Olufsen's expertise in picture handling and screen technology has been deployed in order to improve the already sharp picture from the big 42-inch screen of BeoVision 4. Brushed aluminium encases both the screen and a special integrated active loudspeaker reproducing high-quality stereo sound.

As a result, BeoVision 5 does not require any additional equipment to fulfil the standards that Bang & Olufsen is renowned for. BeoVision 5 can also function as a centre for distributing sounds and pictures throughout the house via Bang & Olufsen's unique distribution system: 'Beolink®'.

BeoVision 5 works with the entire range of Beolink® products and can also connect with the Bang & Olufsen DVD 1 and the Beocord V8000 video recorder. All products can be operated with the Beo4 remote control.

The positioning is quite something, too. Imagine brushed aluminium, gathered at 45-degree angles at the corners, surrounding both the plasma screen and the sound system. Inspired by classical art, it can be hung on the wall in its entirety as a single object - just like a picture in a gallery. However, a TV that hangs on the wall is not intended to represent the ultimate in mobility for some users who prefer greater freedom in their options for their personal home décor. Should it be positioned in the middle of the room on a base? Should the base be motorised so that you can rotate the television from your armchair using the remote control? What about a drawer system in the same design to conceal the DVD player, satellite receiver or video recorder? Or what about leaning the television against the wall, if you don't want to hang it up? Everything has been thought of!

BeoVision 5 is a unique 108cm (42 ") plasma home cinema concept from Bang & Olufsen. With its obvious associations to the art-of-painting, this plasma master is truly a work of art in itself. This is reflected in its outstanding design affording the user many different placement and colour options. The design of BeoVision 5 was orchestrated by David Lewis, Bang & Olufsen's chief designer.

The combination of a a high quality plasma display and Bang & Olufsen's competences in video signal processing means that the picture on BeoVision 5 is the best in the industry. Its advanced sound system, using B&O's active loudspeaker technology, provides a sonic experience that perfectly matches the outstanding quality of the picture. The built- in loudspeakers, placed below the screen, function as both a centre channel when used in a surround sound set up or as a superb stereo sound system when the BeoVision 5 is used as a stand alone TV.

Operationally, BeoVision 5 has much in common with the BeoVision Avant which means that it can be a system master, together with an audio system to distribute picture and sound around the house.

Picture and Sound Quality merge exquisitely in the new BeoVision 5 from Bang & Olufsen. Containing a striking 108cm 16:9 plasma screen and a pair of powerful built-in active loudspeakers, BeoVision 5 is framed elegantly in your choice of five shades of brushed anodised aluminium. Years of Bang & Olufsen expertise unite these fields to prove that the beauty also has brains.

Until the advent of plasma technologies, the idea of hanging a television set on the wall has been confined to the realm of science fiction films. Now that the dream has become reality, Bang & Olufsen takes this possibility a step further by offering a plasma solution that encompasses much more than a simple 'picture on the wall'. BeoVision 5 is therefore a natural choice for people wishing to combine great viewing and listening sessions with flexibility in placement.

Offering a selection of brackets and stands, Bang & Olufsen offers a multitude of placement possibilities for BeoVision 5.

Featuring a pair of active loudspeakers located directly below the plasma screen, BeoVision 5 can provide up to 96 dB of stereo sound on its own. A built-in Dolby Digital® surround sound decoder offers a wealth of sonic experiences - and even includes automatic detection of this 5.1 channel digital sound format.

The many facets of BeoVision 5 plasma TV

Once again Bang & Olufsen has succeeded in combining the objective parameters of picture quality and the subjective elements of viewing comfort to provide an extensive and enveloping viewing experience.

An exceptionally high level of Picture Quality is achieved through the employment of elements including motion compensated progressive scan, Digital Adaptive Luminance Peaking, Digital Colour Transient Improvement (CTI) and adaptive black. Presenting all horizontal lines at once, the BeoVision 5 digital interpolation system eliminates disturbing motion artefacts caused by viewing an interlaced scan on a large screen. By calculating object movement in pixels per field, new pictures are interpolated according to object motion.

Further development of Bang & Olufsen's own Digital Adaptive Luminance Peaking circuitry adds additionally to the Picture Quality by amplifying the peaking according to the level of luminance shifts present. This purely digital function peaks large luminance shifts proportionally less than small shifts, providing a uniform visual experience. Furthermore, the wideband Digital CTI employed in BeoVision 5 assures a high degree of dimensional precision thanks to a gentler amplification than compared to standard CTI circuits.

How black is black?

Maintaining a proper black level is ensured by the employment of advanced adaptive black circuitry. Correct colour saturation is assured as the brilliance level is automatically adjusted during viewing by BeoVision 5. Reading the content of the current on-screen image, BeoVision 5 automatically increases colour saturation on very light images on the one hand, whilst keeping black details from drifting into grey upon a content shift. The screen, the user, the surroundings The field of Viewing Comfort, which involves the interactions between the screen, the user and the surroundings receives great attention through a number of elements. Automatic Picture Control sensors found in the striking "magic eye" found on the top right-hand corner of the BeoVision 5 monitors the amount of ambient light in the room and ensures the best possible picture quality under all lighting situations.

Protection against low-frequency damage at a high volume level is provided for all Bang & Olufsen BeoLab speakers by Bang & Olufsen's patented Adaptive Bass Linearisation (ABL) circuitry. ABL monitors the displacement of the loudspeaker units and reduces the output level if any risk of mechanical damage arises. The ABL circuit has very fast attack- and release times for optimum protection and sound performance.

Furthermore, both the BeoLab 2 and the BeoLab 1 loudspeaker feature patented thermal protection circuitry which guards against overheating and burn-out by monitoring the physical temperature of the woofer. An NTC resistor mounted on the rear of the magnet system in combination with a sophisticated simulation of the voice coil temperature triggers an automatic reduction of output if the temperature should exceed the critical level.

Dimensions: The active speakers within BeoVision 5 are the same as the latest (2002) model of the BeoVision Avant. The unit is 17cm wide at the bottom and around 10cm at the top of its 1,10m frame. It leans 9 degrees back and rests (when placed on the floor) on three small metal feet.

BeoVision 5 Cabinet (part number 1417759) has two drawers side-by-side for BeoVision 5 to stand on.

BeoVision 5 can be shaped and coloured in such a way as to complement its surroundings. The aluminium frame and front loudspeaker cover are delivered in the same colour combinations as BeoLab 1 : Metallic black, silver, red, green and blue. It can be positioned in one of several ways. On a floor stand at a 9 degree angle, on a wall bracket at two different heights and either parallel to the wall or at a 9 degree angle to the wall, on the floor on a cabinet which can house two units such as DVD 1, Beocord V8000 or a Set-Top Box, and finally on a motorised floor stand.

Ideally BeoVision 5 should be set up with BeoLab 1's in aluminium in the front with BeoLab 2 and BeoLab 6000's in the rear. DVD 1 and Beocord V8000 should both be housed in the purpose built silver cabinet.

Until the advent of plasma technologies, the idea of hanging a television set on the wall has been confined to the realm of science fiction films. Now that the dream has become reality, Bang & Olufsen takes this possibility a step further by offering a plasma solution that encompasses much more than a simple 'picture on the wall'. BeoVision 5 is therefore a natural choice for people.

The active speakers within BeoVision 5 are the same as the latest (2002) model of the BeoVision Avant. The unit is 17cm wide at the bottom and around 10cm at the top of its 1,10m frame. It leans 9 degrees back and rests (when placed on the floor) on three small feet.

Both BeoVision 5 and BeoLab loudspeakers are available in a variety of colours (to match the colours of BeoLab 1) including red, black, aluminium, blue and green, which together offer a solution to suit both you and your interior décor.

At the top of BeoVision 5 is a little plastic translucent dome which electronically surveys its surroundings. Not in the way of Big Brother - but in keeping a watchful eye on the light conditions in the room in which it is placed. It looks out for instructions from the Beo4 remote control and signals by either a red or green light dot if the television is switched either on or off. It also adjusts the picture according to the lighting conditions of the room itself: brightening the picture in a very bright room, or lowering its intensity in a darkened room. However, BeoVision 5 is not the first television to introduce this little dome. Beosystem AV9000, which was the first integrated AV system from Bang & Olufsen, accommodated it as well, placed in a similar position outside of the frame.

Beosystem AV9000 created a lot of attention in its time and was a breakthrough in home entertainment. But the dome created ill-feeling in that it challenged the expectations as to the general design of Bang & Olufsen products. It stood out in an unusual way. At the time of AV9000's introduction there was a resistance movement challenging the company's stance towards so much innovative, aesthetical design.

Ten years later it is a case of déjà vu. However, its reintroduction was proposed by the development team as an answer to a simple engineering problem.

This websites use cookies. By continuing to browse the site you are agreeing to our use of cookies.
Accept More information