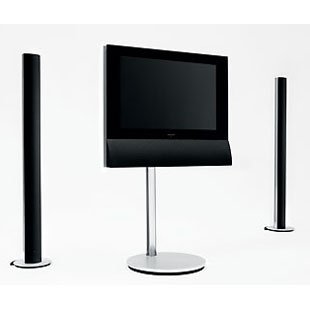 BeoVision 6 - 22 is an LCD 16:9 TV set introduced on 10 November 2003. It is fitted with a 51cm (diagonal) LCD screen which is coated similar to the Avant. Active speakers are positioned at the base of the monitor, similar to the MX range of television sets. The rear of the unit is curved, similar to that of BeoSound 1.

The unit is available in one colour only - Black - and is primarily designed for link-rooms: i.e. as an extra set for the kitchen or bedroom.

BeoVision 6 - 22 may be fitted with a motorised base which turns the set and also regulates the inclination. Standing possibilities include a low floor stand similar to BeoVision 5, wall bracket or a high floor stand high (as with BeoVision 1).

This new LCD TV can be used as a PC monitor, too. When watching normal TV programmes, 'TV' on the Beo4 is selected; however, by combining the BeoVision 6 to your PC as a monitor via the rear-mounted DVI socket (see further details at BeoTech) and selecting 'PC' on the remote control, BeoVision 6 may be used in conjunction with your home computer.

One of the biggest problems of LCD technology has been the restricted viewing angle - in other words, the image is not visible if you look at the screen from an oblique angle. Although LCD technology has made considerable progress in this area, too, Bang & Olufsen’s engineers were still not satisfied.

“Our ambition was to create a television that you could hang somewhere like the kitchen wall. And it would be no good if you could only enjoy it if you were seated at the dining table, and couldn’t see the picture if you stood at the worktop,” explains Sørensen.

The solution was to equip the BeoVision 6 with a range of stands and wall fittings that make it easy both to turn the television from side to side and to tilt it up and down. The tilt function was a challenge to Bang & Olufsen’s developers. The first prototypes were either too clumsy and complicated or they were too difficult to operate. When the answer occurred one day to one of Bang & Olufsen’s engineers, it was so simple that it was difficult to understand why nobody had thought of it before.

A design that allows the television to revolve around its own centre of gravity is both simple and discreet – and at the same time it makes it possible to tilt a television weighing 18 kilos at the push of a finger. The rear of the BeoVision 6 is curved. Visually, this makes it appear even flatter than it is in reality, and at the same time its curved shape makes it possible to turn the television through greater angles, both on and off the wall.

The sound is half the experience

It has always been Bang & Olufsen’s philosophy that the sound is half the experience of a television. For this reason, equal effort has been put into sound and picture in the BeoVision 6. The slightly slanting sound panel under the screen contains two 7,5cm bass reflector speakers and an ingeniously designed bass port. This integrated speaker system gives BeoVision 6 what it takes to deliver a stereo sound that surprises most people!

How black is black?

The correct level of black is ensured through the use of advanced Adaptive Black hardware. The right colour setting is obtained by allowing BeoVision 6 to adjust the light automatically while the television is in use. The electronics “read” the image on the screen and automatically increase the colours if the image is very pale, while the technology prevents black details from gradually turning grey during image shift.

By focusing on a number of elements, viewing comfort – which involves an interplay between screen, user and surroundings – is accorded a high priority. Automatic image control sensors meter the background light in the room where the television is located, and ensure the best possible image at all light levels. A special anti-reflection-treated contrast screen also reduces the effect of external light incidence by over 80%. The result is that the contrast is markedly improved, which in turn provides a richer screen colour experience. Elements such as Hollywood-like electronic curtains, that open and close automatically, and Active Image Format Optimisation (in which the current screen image is automatically scanned and the best image format then presented on the screen) are included to add extra dimensions to the viewing experience. BeoVision 6 also uses digital noise reduction to decrease the noise in the image.

The tilt table mount was available for counter top mounting, designed to allow the bass port on the underside of the TV to 'breath'. Motorised floor and table stands were complimented by a wall mount bracket which gave manual tilt and turn.

This websites use cookies. By continuing to browse the site you are agreeing to our use of cookies.
Accept More information